Roland with our squad on our finished porch.

Those of you who have been faithfully following my blog for the past year know that I am very involved with a non-profit called The Center for Faith Justice.  The Center runs a week-long service trip in Dunlow, West Virginia, which lies about as far southwest in the state as you can go before hitting Kentucky.  For the second year in a row I made the arduous 9-hour trip to Dunlow, along with 50 teenagers and 7 of my fellow adult volunteer advisors.  Adapting to driving a Suburban van was easier than I thought, and thankfully all seven vans made it safely to Dunlow.

I have to say this was the best week that I have ever spent on a service trip.   The student volunteers had come from the same two schools, Mount St. Mary’s and St. Joseph’s, Metuchen, as last year, but there was something very special about this group of teenagers – something hard to quantify.  Most of them didn’t know each other prior to the week, so there was an openness about them, but that didn’t explain the authenticity, playfulness, and kindness that made me so glad that I was a member of this merry little band.

The teens were divided into seven service groups, each with a project or set of projects to accomplish by week’s end.  My service group was comprised of four boys and three girls, and our task was to build a porch (really a deck but they call it a porch in Dunlow) onto the front of a trailer owned by a woman named Wilma.  Wilma is mother to an autistic and blind adult son who is confined to a wheelchair, and the expression “salt of the earth” applies to Wilma in spades.

Wilma with Hunter and her niece.

Coached by our able crew chief, Roland, my squad immediately launched into the work of  building the porch frame, digging 18 inch post holes (horrible work), and generally following his instructions as we learned how to construct the porch.  Other than using the power saw to cut the boards and posts, my squad did everything, and with Roland teaching them, they quickly learned how to measure, use a level, and most of all, operate a power drill.

The Charlie’s Angels of drilling (Annie, Abbey, and Gaby)

For some reason that I might never understand, my team of seven bonded with me in a way that no other group had done before, and an instant family was born.   Maybe it was my treating them all to ice cream at the end of the first day, or maybe it was just their personalities, but the affection was strong and mutual from day one.

CJ and Riley were determined to get the 18″ post holes dug – horrible work!

My job was making sure that everyone was kept busy, that everyone listened and carried out Roland’s instructions safely.  If there was a task that only required two people at a time, I rotated the volunteers in and out, so that everyone got a chance to work on a part of the structure and thus take ownership of the entire porch.   The girls were just as eager as the boys, and soon the porch took shape, first base, then decking, then railing, and finally stairs.

Wilma had come out the first day to introduce herself, and quickly became a favorite of the group, along with Roland, whom the kids decided was a “god” and Dexter and Shadow, the two dogs who had the run of the place.   Wilma’s two nieces visited and Rachel, her elder niece, helps Wilma care for her son Chris two days a week.  Rachel’s toddler son Hunter became a source of entertainment for our gang, and he proudly wore a pair of Thomas the Tank Engine underpants over his diaper that by divine intervention, I had happened to purchase in his size in Target before leaving NJ.

Wilma eventually wheeled Chris out to meet us and told us that he really liked 80s music.  We had a Bluetooth speaker, so we started playing 80s songs, and the moment he heard the theme from the movie Ghostbusters, Chris broke out into a huge smile.   It made our day!

Wilma’s son Chris on hearing the theme from “Ghostbusters”.

Speaking of music, on our trips back and forth each day to Wilma’s home, we would sing all kinds of songs – some I knew, like the Spice Girls and Bruno Mars, and some I didn’t, but the music increased the bond among us.  Who could be miserable when singing Spice Girls on the top of your lungs?

We would eat our bag lunches on a picnic table under a tented awning that Wilma had set up for us, which afforded us some much needed shade since whenever we were actively working, we were in bright sun and the temperature was over 90.   One day Wilma came out with fried zucchini, vegetable pizza, and zucchini bread, all made with produce from her garden.   It was so sweet of her and indicative of the generous people you encounter in Dunlow, people who may not have much, but share what they do have.

Vegetable pizza and zucchini bread made by Wilma for us from her garden vegetables.

There was only one day that we didn’t go to Wilma’s and that was the day of the monthly Food Pantry.  Bill and Addie Likens have been running this Food Pantry for 15 years and it just seems to get bigger every year.   Addie spends days driving around collecting donations of food and clothing, and our volunteers all spent time helping to sort, categorize, and box the donations.

The girls and Darryl sorting cans for the Food Pantry

The morning of the Food Pantry, we helped Addie make a pulled pork sandwich lunch for 150-200 people.   Then at 1 pm the Food Pantry began and it was all hands on deck.   Everyone had their assigned location and task, and 150 boxes of staples, meat, produce, even laundry detergent was handed out and loaded into the good people of West Virginia’s cars by our teens.   This was my third Food Pantry and despite the number of volunteers and families we served, it went amazingly well; I never had to search for volunteers to carry boxes out to the cars – the teens were always right there to pitch in and carry.

Playing with one of the young girls at the Food Pantry

We really want our teenagers to encounter the folks they are helping and the Food Pantry is a great chance for them to interact, chat, and meet the locals.   There were babies and children, and our teens loved playing with them, but they also spoke with adults, and some heard really terrible stories.  They witnessed an abusive husband and father, and they heard the tale of a 13-year mother who tried to kill her infant by feeding her Xanax in her bottle.   But thankfully the majority of interactions were friendly and warm, and it was obvious that we were appreciated and even loved by the locals.

Will with one of our Food Pantry teams

On Friday, we finished the porch, having put together the final piece – the stairs.   Our porch was solid construction, looked great, and Wilma loved it.   We all signed our names underneath the deck.  In addition to impressing Wilma, Roland told me that he loved that our teens didn’t have to be told something twice and that he was very pleased to see how hard they had worked all week.

One of the goals of our organization is to try to instill in the teens that this is not just about a single week of service.   We want them to realize that when they are helping others, they are answering prayers, that God is using them to do His work on earth.  We challenge them that if they like how this week makes them feel, that they figure out how they can continue to do God’s work next week, next month, next year – for the rest of their lives.   They don’t have to join the Peace Corps or become social workers; they can make service an integral part of their lives in a variety of ways, and we have them share ideas about what they will try to do moving forward.

My fellow advisors, including Grace, could not have been more fun, hard-working, and as genuine as any of the teenagers.   They were ideal role models for our teens, and we had so many laughs that my sides still hurt just thinking about them.

Grace and Tracey leading a group on our woodland hike

When the week was over, I have to say that, along with my squad, I got a bit emotional.   Not only did they work hard, but they were so much fun to be around.  As we gathered together for a final photo, we formed a huddle, and I tried to tell them that I hoped that they would never forget that they had special gifts that I knew they would all share with the world, but the words got caught in my throat.   When they realized that I was getting choked up, they all teared up, and the hugging went on and on.

So, to CJ, Riley, Darryl, RJ, Annie, Abbey, Gaby, and to all their fellow teens who shared our week in Dunlow:  Please know that I could never have asked for a more amazing group of people to spend a week in service to others.   You will always remain in my heart and I know you are all destined to do great things with your lives.   Thanks for inspiring me to be a better person, and until we meet again, always remember our week in Dunlow and unpack your heart whenever and wherever you can. 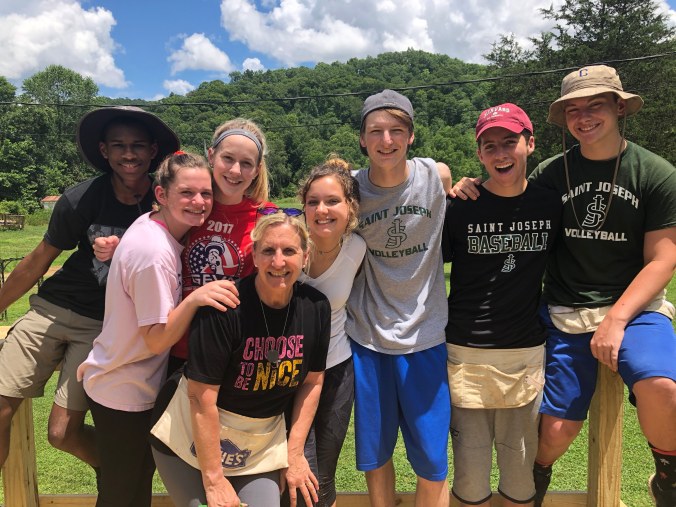 To learn more about The Center for Faith Justice, visit http://www.faithjustice.org/

6 thoughts on “Unpack your Heart”