Croatia?  Where is that and why would I want to go there?   This was my attitude a few months ago when my sister-in-law Sara suggested I accompany her on a Roads Scholar tour.  I had already planned a bucket list trip to Santa Fe this summer, and I wasn’t eager to travel to a place that I wasn’t even sure I could find on a map.  But after researching the itinerary, viewing many photos on Google, and encouragement from my husband, I was IN. 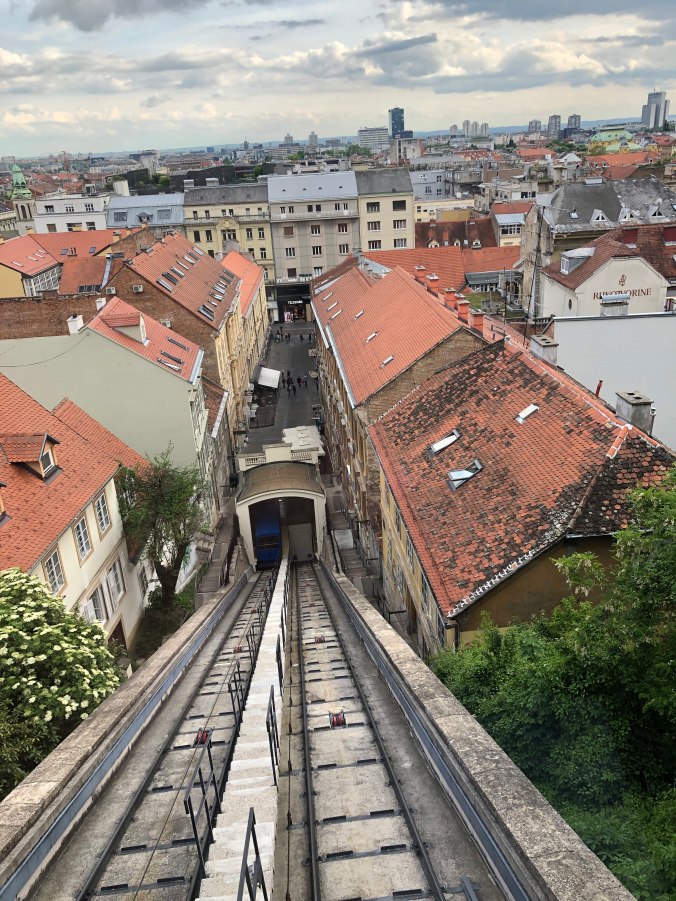 We met our fellow Roads Scholar travelers (just 20 of us plus our guide Dejan) in vibrant and cosmopolitan Zagreb, the capital of the country, its largest city (of 4 million who live in Croatia, over a million live in Zagreb), and one of the few places that we visited not located on the coast.  The Croatians like to describe that the country is in the shape of a croissant, and Zagreb is on the top right curve of the pastry.  We quickly discovered the funicular which took us up to the old town, where we were treated to a panoramic view of the city.  We also found one of the treasures of the old town, Saint Mark’s church, with its colorful, tiled roof featuring the crests of Croatia and Zagreb. 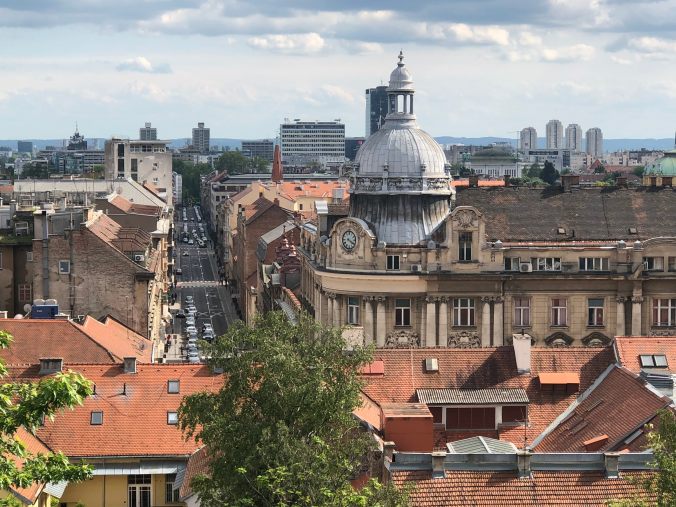 Zagreb from the top of the funicular.

The next day we met our extremely capable bus driver Zoran who drove us west to the Istrian Peninsula where we got our first look at the Adriatic Sea and where we spent two days in Opatia, a seaside resort once favored by the Austrian-Hungarians.  There was a lovely promenade along the water from our hotel to the center of town, and I swear Opatia has more hotels than Atlantic City.  Across from our hotel was a famous chocolate shop, where many of us dropped a few kunas on hot chocolates that were thick like pudding and had to be eaten with a spoon. 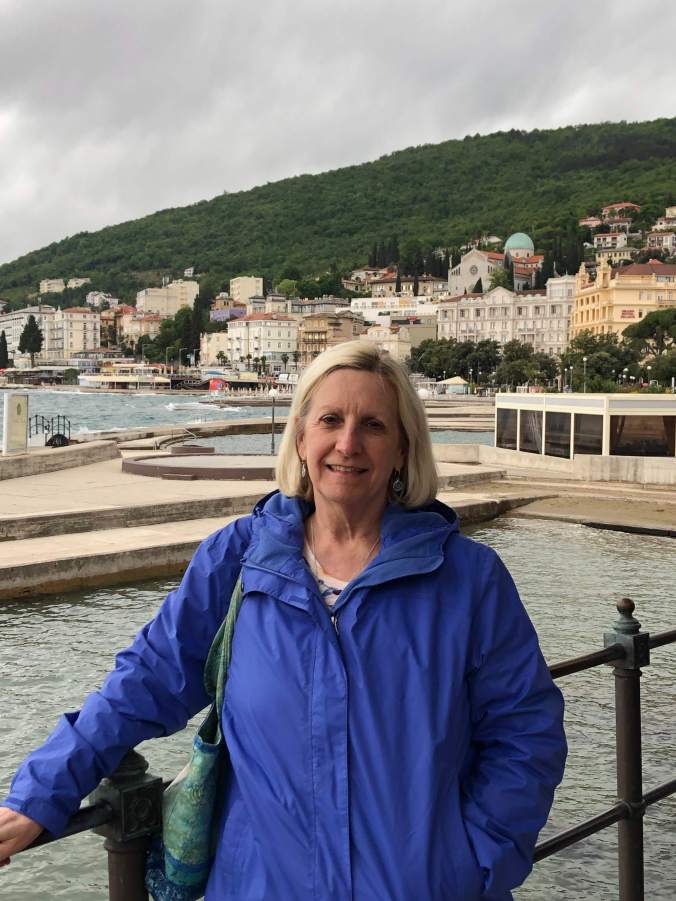 The seaside promenade of Opatia

The hot chocolates eaten with a spoon.

From Opatia we made a day trip to Rovinc and Porec.  Rovinc was once an island but now connected to the rest of the peninsula; its Venetian influence was quite apparent from the moment we stepped off the bus.  Its patron saint is Saint Euphemia, a female Christian martyr whose statue sits atop her church’s steeple which was modeled after the Saint Mark’s steeple in Venice; in many ways, Rovinc was a mini-me of Venice.

The lovely Venetian town of Rovinc

Porec’s claim to fame is the Euphrasian Basilica, loaded with the gilded mosaics seen in Byzantine churches.  The mosaics, both on the outside and inside the church, were definitely worth the visit to the town.

One of the many mosaics in the basilica of Porec.

On our way to the Plitvice Lakes National Park the next day we encountered snow on the ground!  This is no more normal than snow would be in May in New Jersey; there is no disagreement here about what is causing all this weird weather – climate change.

Snow in May – not normal!

I would have to be a more talented writer to adequately describe Plitvice Lakes.  Sixteen lakes cascade into each other, creating dozens of waterfalls over limestone rocks.  Can one ever have too many waterfalls?  You view the waterfalls and lakes from scenic overlooks, from walking on a network of boardwalks (many dangerously narrow), and from hiking through the woods for miles.   Thankfully the park is a protected UNESCO World Heritage site because it is a treasure and one of the wonders of the world.   Photos of Plitvice Lakes had convinced me when I did my research that I needed to visit Croatia.  The park did not disappoint! 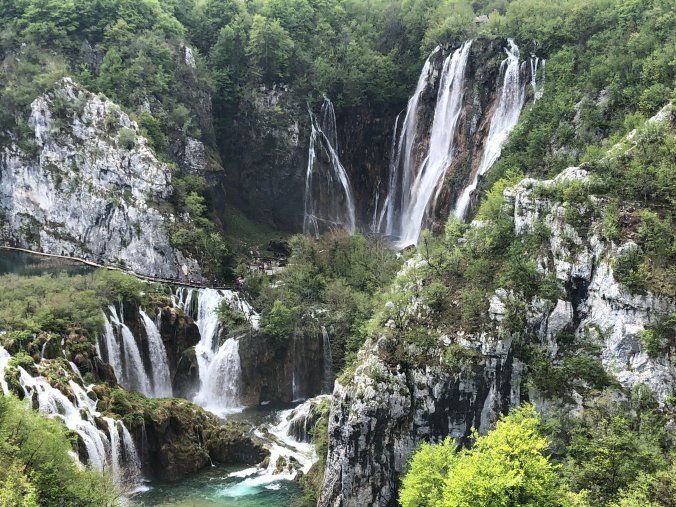 Look closely and you can see people walking on the walkways – waterfalls everywhere!

One of the places that completely exceeded expectations was the city of Split, Croatia’s third largest city; it was truly a revelation.  Split is a coastal town where the Roman emperor Diocletian built his retirement palace.  Unlike many other ancient sites, his palace is not in ruins, but is woven into the city, separated only by its original walls and gates.  People live in apartments that have been built in the palace, work in shops and restaurants, and scenes from Game of Thrones have been filmed here.  After Diocletian died, Christians took over the town, removed his tomb (no one knows what they did with his body), and replaced it with the sarcophagus and relics of Saint Dominus, one of the many Christians whose murder was ordered by Diocletian.  Everyone loved this delicious bit of irony and karma. 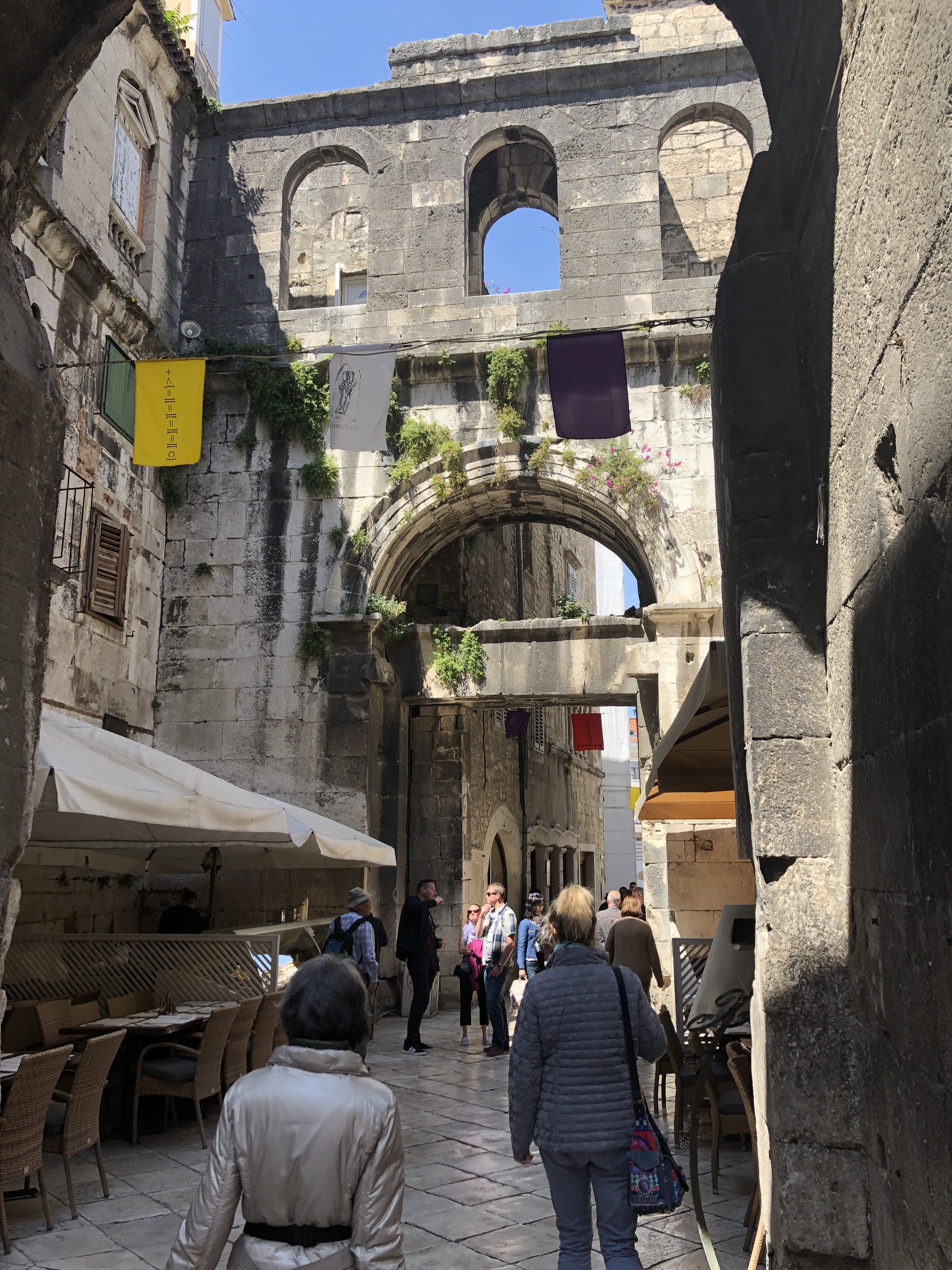 One of the gates of Diocletian’s palace – restaurants, shops, and apartments within.

One of the gates leads out to a lovely promenade along the harbor, and the first night we were there, there was a huge festival in honor of Saint Dominus; we were treated to live music and fireworks. Our hotel was just steps away from the palace and our home base for three days, so we had lots of forays into the palace and surrounding city.

One of the highlights of our stay in Split was hiking up to a café bar on the side of a mountain that offered a panorama view of the city, nestled between the harbor on one side and the Dalmatian mountains on the other.  Much of Croatia lies between the mountains and the sea, and I think Croatia won the lottery when it came to carving up the former Yugoslavia because it kept most of its original territory along the Adriatic coastline. 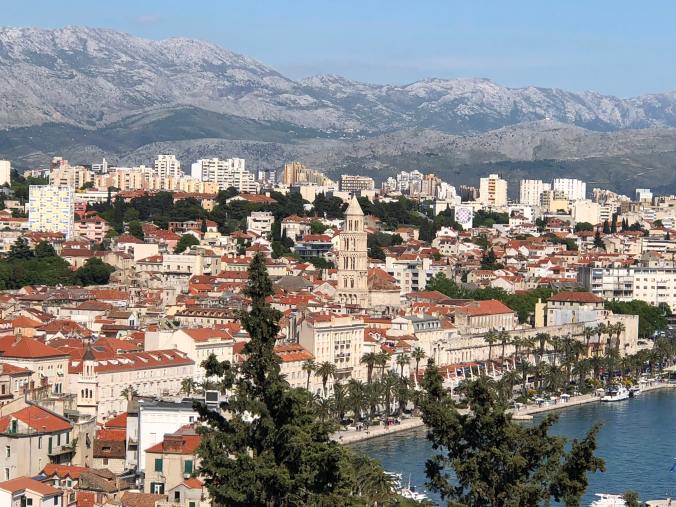 View of Split – the palace lies along the harbor – you can see one of its towers on the right.

From Split we visited Trogir, a medieval town built on an island and another World Heritage site, and the art museum of Ivan Mestrovic, Croatia’s most famous scuptor, whose statues are everywhere in Croatia (and here in the States as well).

One of the shops in Trogir.

In order to visit Mostar, we had to cross into Bosnia-Herzegovina, which involved two border crossings.  Mostar is known for its bridges, and I had seen photos of its most famous bridge, so I was excited when we finally arrived.  The bridge was bombed during the 1990s but completely rebuilt as it had been, using the same limestone from local quarries.  The Mostar bridge was lovely, but the crowds of people made it impossible to really appreciate it as you crossed over it.

The famous bridge of Mostar in Bosnia-Herzegovina.

Mostar was once part of the Ottoman Empire, so the town has a Turkish feel to it,with streets lined with markets and a mosque calling people to prayer. Our local guide spoke about the horror of the war as a girl of 12; she and her mother went door to door during the night asking for any bit of food that people were willing to share, and her brother was sent to a concentration camp for many months.  She has no hatred towards any ethnic group (there are many in the countries that now make up the former Yugoslavia) and she hopes all can continue to live in peace.

The view of the Mostar bridge from our restaurant with the mosque’s minaret behind it.

Finally, we arrived at Dubrovnik, which may be the best known of Croatia’s cities.  It is quite a tourist attraction and a lot of that has to do with the fact that Game of Thrones has filmed the King’s Landing scenes within its old city walls.   Our local guide Lydia grew up within the walls and her insider perspective provided us with a unique and rare insight into the city’s history and its people as we toured the city with her.

Dubrovnik from the highway above the city.

The people who inhabited Dubrovnik were skillful traders and negotiators, and avoided war with both the Venetians and the Turks, remaining an independent city-state for over 450 years.   Even when Napoleon entered the city as its conqueror, it is widely believed that the city leaders reached an accord with him so that it wasn’t an actual conquest.

Despite the crowds, it was one of my favorite places; when some of us expressed interest in taking a boat ride around the city, Dejan arranged it despite the fact that it was technically his afternoon off.  Sara and I also climbed and walked the 1.2 mile length of the walls, which offered spectacular views from every direction.

One of the magnificent views from the walls of Dubrovnik.

Our last two days were spent south of Dubrovnik, in the Konavle Region, where we visited an old olive oil press and farm, and later a local vineyard and winery for dinner.  We also visited two old mills, the seaside town of Cavtat, and enjoyed a wonderful farewell dinner at a farm with traditional dancers and singers.

Sara enjoying the flavored grappa at one of the water mills.

The patriarch of the farm and our dinner host was 86 years old, quite proud of his home and especially his garden, which looked like the Garden of Eden.  It was therefore quite hard to imagine that during the 1990s war, the farm was bombed with napalm and his home had to be almost completely rebuilt.  It was a sobering reminder of this country’s recent troubled past. 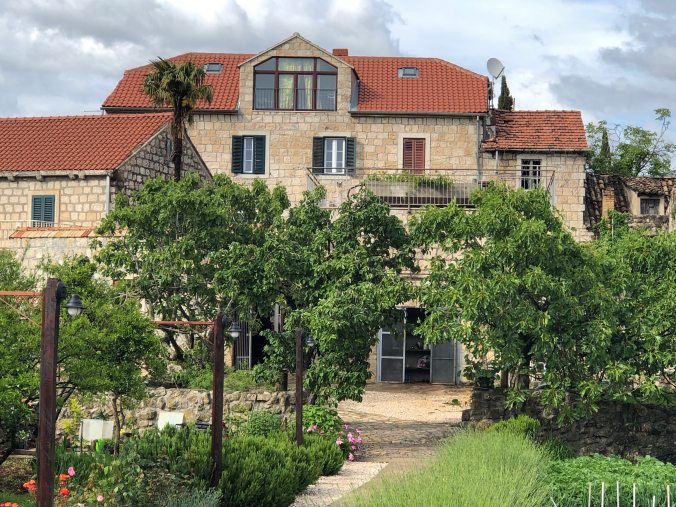 The farmhouse and garden where we enjoyed our farewell dinner in Cilipi.

I have been on travel company tours and loved them all, but I must say I was very impressed with Roads Scholar.  I loved the small group, the fact that all but two meals were included, the emphasis on learning, and the pace and organization of our travel; we never stayed in a hotel for less than two nights. 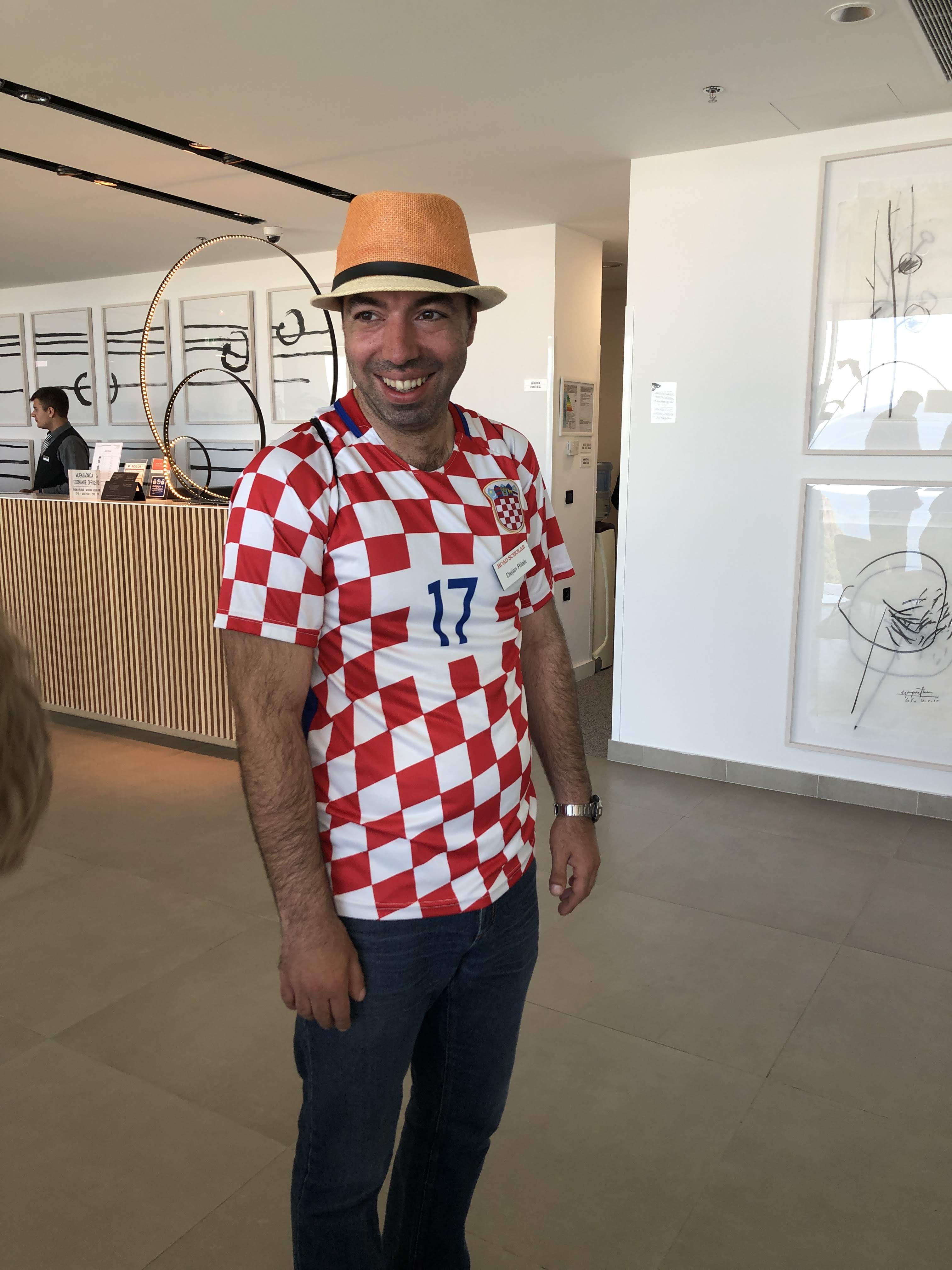 Our fearless fashionista leader, Dejan, who wore the soccer shirt and orange glitter hat so we would see him in the Dubrovnik crowds.

I have to thank our lovely fellow travelers for being considerate, fun, and engaging; sitting next to anyone on the bus or at a meal always involved lively conversation.  Zoran, our bus driver, took us down country roads that didn’t seem wide enough to fit a motorbike much less a motorcoach, yet I always felt safe in his hands.  Dejan, our tour director, couldn’t do enough for us; he was caring, knowledgeable, fun-loving, and always eager to share a story or a laugh.  And finally, I have to thank Sara because I would not experienced this extraordinary country and people without her invitation. 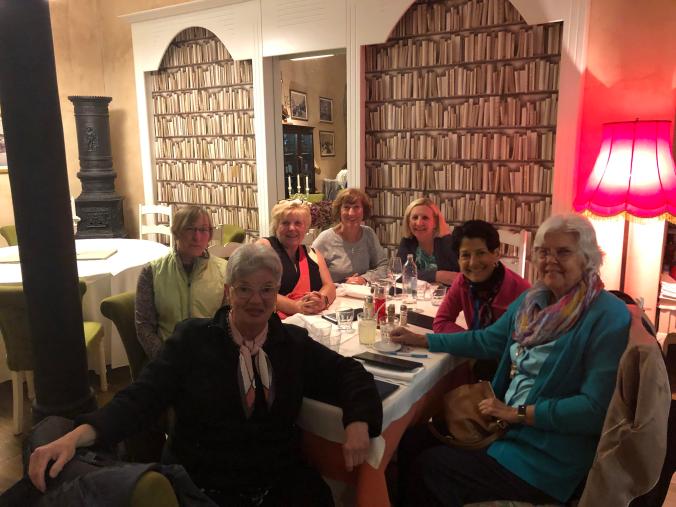 Girls night out in Split.

What will I remember about Croatia?  The paintings in the Croatian Museum of Naïve Art.  The liquid lace of the magical Plitvice waterfalls.  The marmalade-stuffed croissants at every breakfast.  The singing of the crowd in Split as the fireworks exploded across the night sky.  The labyrinths of narrow streets in Rovinc, Split, and Dubrovnik.  The panoramic views from atop the Dubrovnik walls and the café bar in Split.  The twinkle in Dejan’s eye as he shared a bit of irony or humor.  The evening Dubrovnik Chamber Trio concert whose musicians were all women.  The tiny pink rosebuds in our gin & tonics.  The camaraderie of our merry little band of travelers and our laughter and engaging conversations. The resilience of the Croatian people who have transformed their country after socialism and war into a unique, beautiful, and incredible tourist destination.

Now I know where Croatia is and why a person would want to visit it.  Go if you can.

I am so glad that I did! 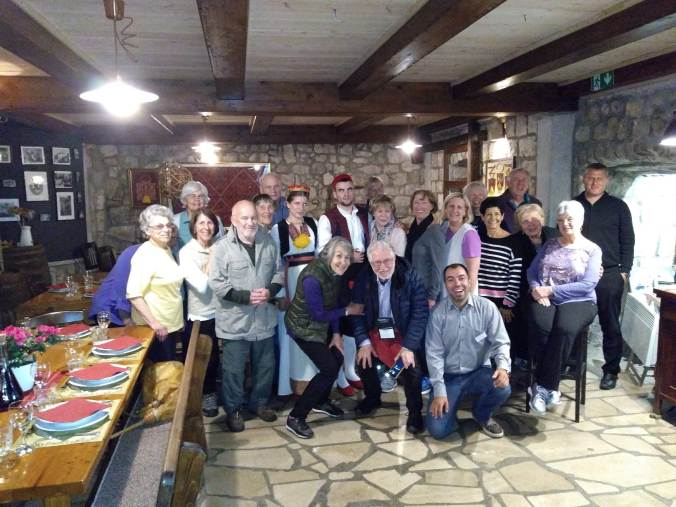 Our last group photo in the farmhouse in Cilipi.