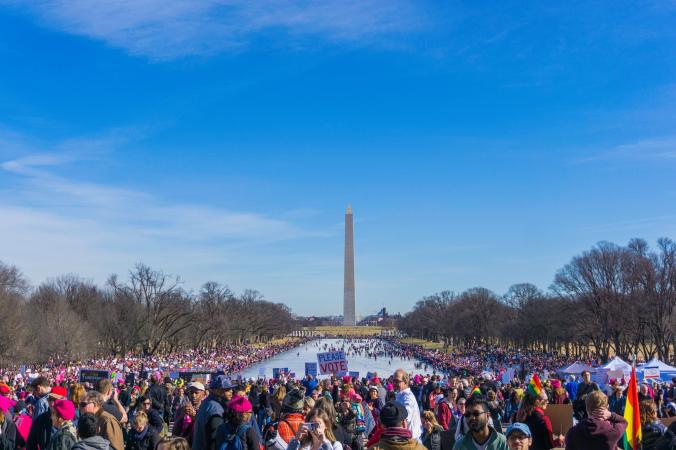 Political activism has never been a passion of mine.   Like most people, I have had little interest in the workings of government and looked at politics as distasteful, dirty business full of phonies.   Plus, I didn’t have the time to get involved while I worked and raised a family.

However, retirement has once again afforded me an opportunity to explore new interests, and when Lindsay, a wonderful college friend who lives in Fairfax, VA, invited me to stay at her house and participate in the Washington Women’s March, I jumped at the opportunity.  Not because I am a rabid rabble-rouser, but because I have started paying attention.

We were lucky that it was a beautiful day, not frigid as it had been the last few weeks.  The stage for the speakers was set-up at the foot of the Lincoln Memorial, and we lined up on both sides of the reflecting pool, which was frozen.  Though the crowd was not as big as last year’s historic march, we estimated that between 50,000 and 75,000 people were there – and not just women. 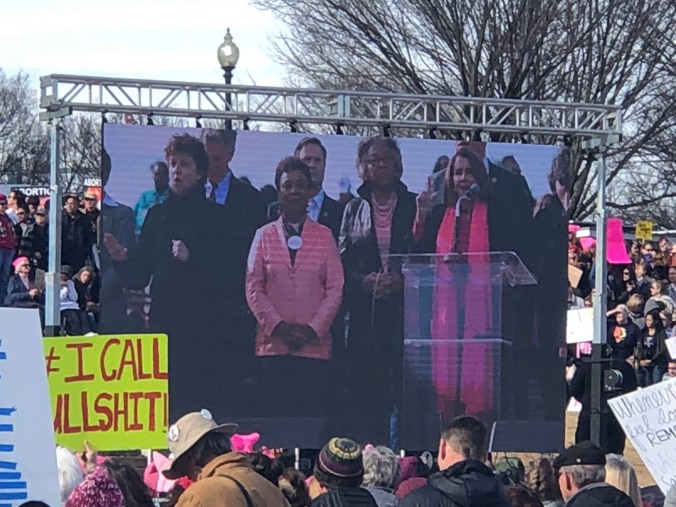 Speeches were scheduled for 11 to 1 pm, and then the march was supposed to go from 1 to 3 pm.  However, because of the government shutdown, members of Congress were still in Washington, so additional speakers were added at the last minute, like Senators Kaine, Blumenthal, and Gillibrand, as well as Nancy Pelosi and many Democratic congressmen and women.   Most of the speeches were short and sweet, and the general theme of the day was energizing the electorate for the 2018 mid-term elections.   The most encouraging news shared by the speakers was that more women were running for office in 2018 than at any other time, thanks in part to the consciousness raising of last year’s Women’s Marches.

This was best summed up by the quote, “If you are not at the table, you’re on the menu.”  It was so soul nurturing to hear that the protests had resulted in action!

However, the crowd got restless when speeches continued past 2 pm, and many of us started to leave the Lincoln Memorial site and head out to march.   By far, this was the most fun of the day.   Everyone was fired up but also respectful, considerate and well-behaved, and every few minutes a chant would go up.

“We need a leader and not a crazy tweeter.’’

“Build a fence around Mike Pence”

One of the best parts of the marching were the signs people carried.  Not only were they creative, but they showed a sense of humor that was wickedly clever.  This next one was my personal favorite: 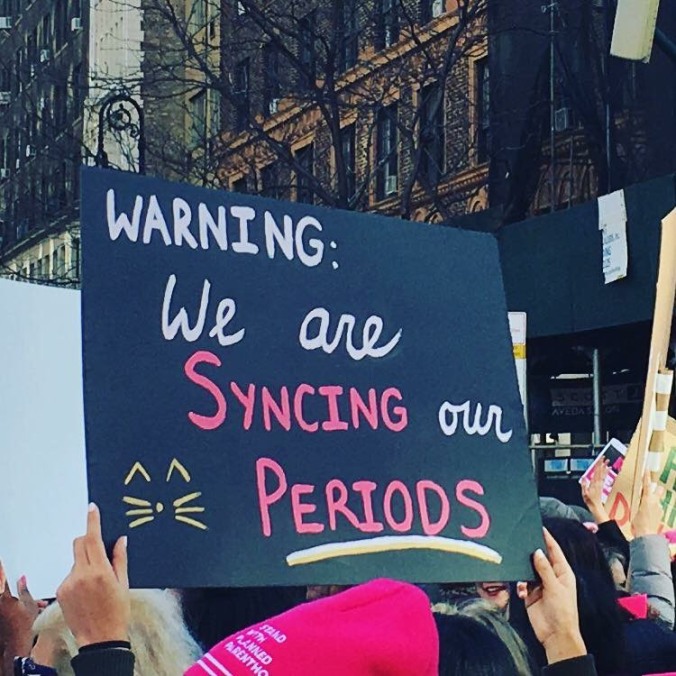 We finally made it to the White House (supposedly he was home) where we continued to chant before leaving.

You may be thinking at this point, good for you, Deb, but it’s not really going to matter.   Those in Congress have been bought and sold to wealthy special interests and it is only those donors who have their ears and souls; we no longer have a true democracy.  I do agree with this sentiment, and I too am often cynical about the possibility of seeing any real leadership from our political parties.

However, it does lighten my heart to see so many men and women come out and make the effort to make themselves heard, and to know that so many ordinary men and women have been inspired to run for office because they are fed up with those who are supposed to be representing them.  If nothing else, we must constantly remind those in power (and it is exhausting) that we are paying attention, and that we still have the right to vote them out if they don’t listen and respond to their constituents. 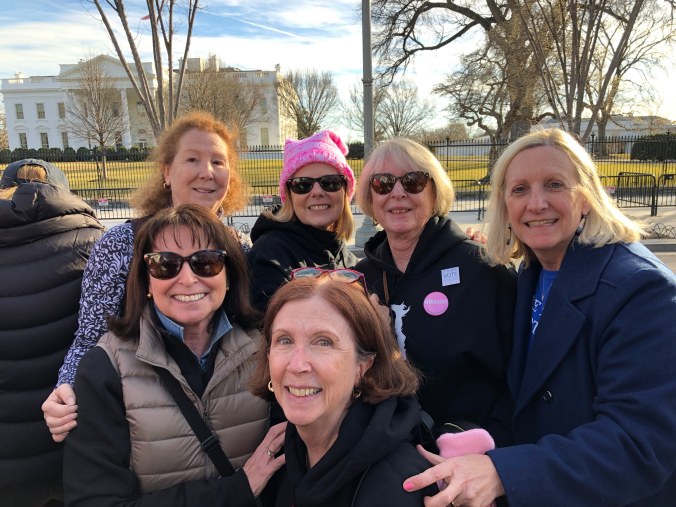 One of my friends who marched with me, Cathleen, told us that her greatest concern is the divisiveness that has grown exponentially in this country, and that we must sit down and listen to each other and get past our differences.  I agree wholeheartedly with her.  We must make the effort to really listen to those who sit on the other side and be open to their points of view.  I truly believe that, when you cut out much of the crap, 99% of us care about the same things – the health, happiness, and well-being of our families, friends, and our communities.

No one wants to drink toxic water or breathe poisoned air.  There should be a happy medium where corporations are regulated so that they are incentivized to protect our environment without having those regulations cripple them.

No one wants anyone to lose their home or choose between feeding their children or getting them medical care because they can’t afford health insurance.  There must be an affordable option for everyone that is fair and cost-efficient.

No one wants to see children who were brought here as babies deported by the hundreds of thousands.  Figure out the rest of the immigration issues later but protect these dreamers now.

No one wants their children to be at a disadvantage and unable to earn a decent living because quality education is not available to them.  We must make education more equitable and make higher education less expensive.

No one believes that it’s OK for women to make less money for the same jobs as men.  Make it against the law.

I believe that more women in leadership positions in government will help us come together and work to solve our problems.  Most women excel at bringing people together.  I see evidence of that every day in the organizations where I volunteer.

We cannot let them divide us, for as the great man whose statue we stood below on Saturday warned “a house divided cannot stand.” 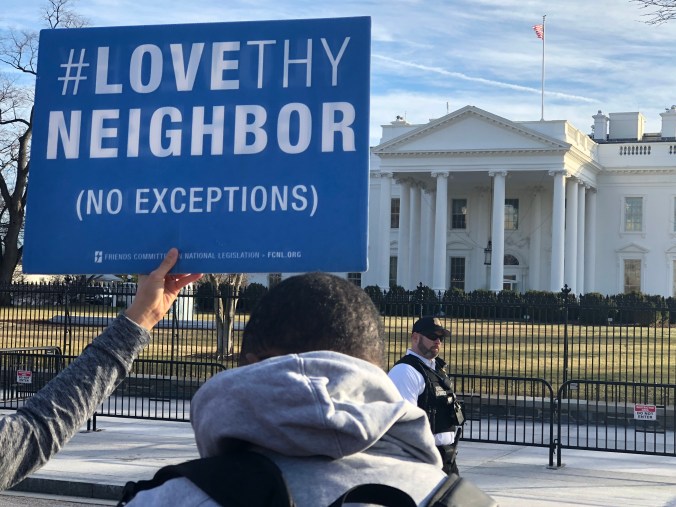 6 thoughts on “Come Together”